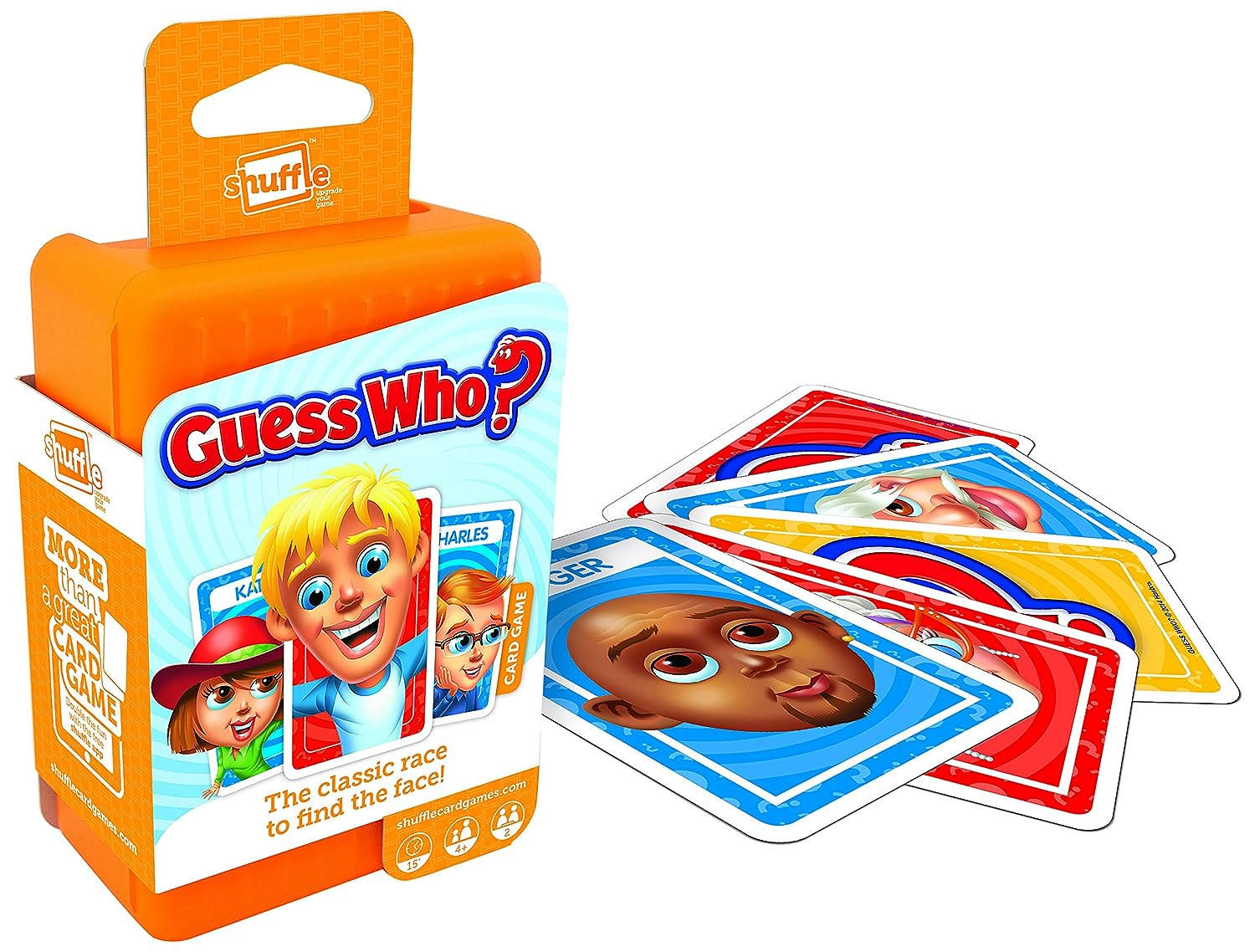 Guess Who (Shuffle) card game is based on the already proven winning formula of the classic race to find the face game of Guess Who! This version effectively replaces the plastic grids holding the face cards with a deck of cards, with players laying out their own matrix of faces on the floor/on a table, and then taking it in turns to ask whether the face they are trying to find has a particular characteristic e.g. a beard, or glasses. The player then turns face over all the cards which are not the one they are looking for, before eventually being left with just one which should match the ‘mystery’ card the other player has face down in front of them.

This type of gameplay develops basic observational and analytical skills in children. While it seems very straightforward to adults who long since developed those skills, this kind of play can be valuable in the process of child development.

The game works very much like the main version of Guess Who, except in a much more portable format. The game comes in a small but hard (& sturdy) plastic carry case, which is both quite funky in its design, as well as being very practical – if you’ve ever tried to take a stack of cards on the road with your friends and family, if you take them in a standard cardboard box it quite often breaks, and if you use the small plastic containers that some cards come in they also tend to get trodden on and broken. That doesn’t seem to be a risk here, with the sturdy carry case being a definite benefit versus traditional alternatives.

The game is accompanied by a free App. Now we’re not usually overly keen on faffing about with App/Game/Toy tie ins, as so often it takes away from the fun of the experience, and only rarely extends/enhances the game or toy play experience. In this case though, we must begrudgingly admit the App wasn’t bad at all. The most valuable feature is a video demo of how to play the game, and although we’re sure most people would know how to play Guess Who, it does a pretty good job of explaining how this version of the game works nonetheless. The secondary feature, which does add some fun to the proceedings is the chance to take a picture of one of yourself or your fellow players, and to edit their images with features from the cards. Based on other products/research we’ve done, we believe kids like this kind of thing and find it almost endlessly funny! For adults, they may prefer to just get on with the main version of the game.

WHO’S IT FOR – this game should work well with kids of around 4-7 years of age, either with other kids playing or with parents/other family members.

THE TOY VERDICT – We liked this game. After all, what’s not to like about a portable version of Guess Who. The App was ok – better than we expected in fact, but don’t let the glitz of the app fool you – at its core this is a portable version of the classic board game which we can heartily recommend.

MIXUPS CARD GAME Mixups card game is simple but compelling card game based on mixing up two different animals on the same card, and then playing a hilarious game of SNAP base don spotting if the same animal is on display across the two cards in play. We found Mixups card game really easy...

MONOPOLY JUNIOR SHUFFLE CARD GAME   Monopoly Junior Shuffle Card Game is a very entertaining, simple to learn and surprisingly addictive card game based on the classic Monopoly board game brand. This card game is a much simplified version of Monopoly - which is to be expected...