Trivial Pursuit Family Edition Trivial Pursuit has been THE classic Trivia brand for decades, and a ‘Family’ version of the game has existed for as long as we can remember. The reason being that it’s difficult for adults and kids to play on equal terms and achieving similar satisfaction if the questions are all standard .. 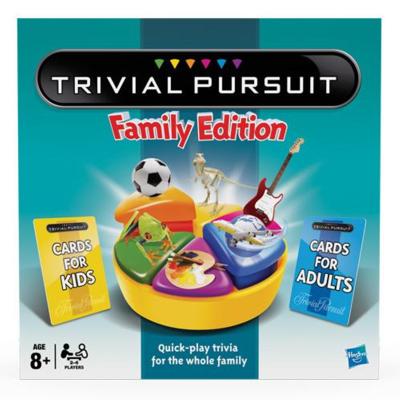 Trivial Pursuit has been THE classic Trivia brand for decades, and a ‘Family’ version of the game has existed for as long as we can remember. The reason being that it’s difficult for adults and kids to play on equal terms and achieving similar satisfaction if the questions are all standard adult oriented questions.

Trivial Pursuit Family Edition looks to solve this inequality via specific questions for adults and specific questions for kids. Frankly, there’s also an additional equalising opportunity – where people in a family or friendship group have varying knowledge sets, to the degree that the same person/people will always win, by having easier kid targeted questions the game also offers an impromptu opportunity for handicapping to a degree, allowing for a more fulfilling gameplay dynamic again.

The Gameplay Twist – it’s well recognised that sometimes board games (especially traditional games) can drag on a bit too long. Well that isn’t likely to be an issue with Trivial Pursuit Family Edition, because the game contains a modified gameplay allowing players to complete the game more quickly versus the much loved, but perhaps too long traditional gameplay. Nearly every space on the board is a wedge space, so there is significantly less moving around the board trying to find the right wedge spaces, and more actually answering questions.

The Questions – the challenge with most trivia games is that it’s really hard to deliver questions that suit everyone, because even with adults, the level of knowledge varies hugely, the same applies to children also. So frankly, some people at the extreme ends of the spectrum are going to find the questions either far too easy or far too hard, that always happens with trivia games. The questions in this edition are ok based on our playing the game with varied family and friendship groups (in some cases over a beer and a takeaway, and in others straight after festive meals!). While there was some mockery of adults answering kids questions, in general this worked as it let brainiacs play a more competitive game against the less knowledgeable adults! Younger children i.e. younger than 8 years of age are more likely to struggle to answer the questions (maybe they would prefer Junior versions of the Trivial Pursuit better).

THE TOY VERDICT – this is a good version of Trivial Pursuit, allowing a broader section of people to play together. We experienced all the usual racousness of arguing over spaces moved, bantering over questions players weren’t able to answer and generally having positive social interaction. If you/your family & friends enjoy playing Trivial Pursuit style games, Trivial Pursuit Family edition is a likely to tick the right boxes for you, as long as you aren’t looking for elongated play and super hard questions.

To buy this game now, just click images below: